Evolution and Sustainable Survival on Earth are synonymous - their known parameters of the boundless wonders our Universe presents to us through the lenses of a free science is a Right of Freedom everywhere.

Since the 1940's, new energy technologies have been available through the actual testing of Einstein's incomplete but testable portions of his Unified Field theory.

StarSteps further expands and clarifies Einstein's Unified Field Theory with the concept of the Radius Of Curvature Of All Natural Law. This did not change any of our mathematics, but dramatically changed the shallow and convoluted Interpretations the gods of science gave to Space, Time, Mass, Matter, Energy and Gravity - changed these factors to utter simplicity with extra ordinary application capacities.

As has been repeated constantly in these blog posts:

While many may be apprehensive of the energy differential at the quantity C level (Einstein said the nuclear bomb was only a tiny fraction of the VC differential), electricity, the electrical nature of matter is always at that energy level, as the Theoretical explanation of the Biefeld-Brown Effect
suggests of the coupling between electricity and gravitation. Review http://freedomtimes.blogspot.com/2010/01/its-musical-universe.html

Also, from StarSteps - The shape of the gravitational curve is modified not only by the mass present but also by the number and position of the electrical charges, referring not only to the charges in the outer shell of the atom but to those within as well, and especially to the fact, not always realized, that the neutron possesses both a positive and a negative charge, although when united within the neutron they are not discernible as charges, but exist as energy which produces the gravitational field. When a better understanding of the laws is acquired, we will be able to produce any shape of curve we desire within the variable and interdependent factors of space, time, mass, matter, energy, and gravity through the common denominator of vibration/frequency. 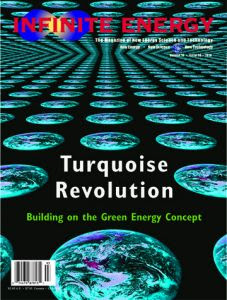 Video presented at the United Nations from Sean Sullivan on Vimeo.

Brian O'Leary:
I believe technology can change our course dramatically, but we must overcome the resistance of vested interests so that we can allow technology the opportunity to accomplish this. Over the past twenty years, I have seen numerous demonstrations of concepts of clean breakthrough energy, water purification and ecosystem restorations that appear to be miraculous, but are in fact very real and practical. Hard as it may be to accept, these miraculous inventions have been denied and suppressed by our mainstream culture. We have been silenced by the tyranny of vested interests. (Full Text of Video)http://www.brianoleary.info/TheSustainableTechnologySolutionRevolution.html

Posted by Freedom Times at 8:08 PM No comments:

Converting Diverse Streams of the Global Movement into a Mighty River

Evolution is Freedom's Choice; we can choose economic strangulation through a corporate design that resembles the dragon eating its own tail and repeat the 'rise and fall" history describes - or we can choose the boundless wonders our Universe presents to us through the lenses of a free science. Reprinted article from Evolution, Intelligent Design, Survival blog follows.

What will it take to convert the diverse streams of the global movement into a mighty river?
FOUR YEARS. GO. - A Campaign To Change The Course of History
The passion and commitment for change is everywhere. A million NGOs worldwide and hundreds of millions of individuals are engaged and active for sustainability, justice and fulfillment.

One single priority common to all, among the diverse list of issues each are otherwise working on.

One single priority, without which the common goals of “a million NGOs and hundreds of millions of individuals engaged and active for sustainability, justice and fulfillment" will not be reached; the one single priority, which if not resolved, renders moot all our other common programs and goals; To date (last 48 years) similar well meaning, passionate and goodhearted individuals and groups have come and gone, failing to address this one priority.

That priority is Freedom in the Science of Energy Evolution.

The “common sense” revelations arising from evolutionary energy systems will dissolve and solve every obstacle to sustainability, justice and fulfillment, as well as all issues presented by John Perkins, David Korten, Ralph Nader, Freedom Times, to name a few.

A comment contributed to this question in FOUR YEARS.GO, suggested “make it cool/valuable/status worthy to live a sustainable life”.

What could be more “cool” than to expand our reality to encompass: antigravity, transportation point to point (without going through all points in between), field propulsion, energy (H2) from water at less than 2 cents per gallon, energy medicine and healing, to name a few possibilities? ……………….With a Science and Technology understood at 4th grade level?

Our advanced modes of communication are ripe to instantly transmit the potential for shifting states of “Ah Ha” experiences; providing the expanding science window to reality is delivered in simple common sense terms, and leads to self recognition of very advanced and practical solutions to contemporary “issues”.

Science now acknowledges with demonstrated nuclear proof that “less is more”; so with advanced scientific theories. The more advanced Science and the study of Reality become, the more simple become the Understanding and profound applications of a truly modern Science as it expands the window to Reality in both the macro and micro realms - a necessary requisite for survival, sustainability and evolutionary processes; a principle that coincides precisely with a metaphysical Principle of Unity.

I provide some background on numerous links which take Plato’s original science spectrum, Physics to Metaphysics, to version 2010:

For those not shy of well known pioneers of science, a brief list of wholistic contributors are referenced. Their insights cohere with breaking down the seemingly opposed pillars of modern science, general relativity and quantum theory. Reducing them into simple, yet advanced scientific reality through the radius of curvature of all natural law, equated to the energy differential of light’s velocity.

However, aside from Einstein, each still struggle with David Bohm’s “Hidden Variables, Leo Smolin’s The Trouble With Physics. , “Physics Awaiting New Options as Standard Model Idles since the 1970’s”, and Deepak Chopra’s review and questioning of The Grand Design: Hawking’s Grand Book, But Where Is the Design? http://deepakchopra.com/2010/09/hawkings-grand-book-but-where-is-the-design-part-2/#more-16578 .

Einstein’s reinterpreted, expanded version of relativity theory is found in StarSteps, provided by my mentor in layman’s, 4th grade level comprehension. It unifies statistical quantum mechanics with relativity, zero point, Walter Russell’s Light , and defines/quantifies the radius in The Yin Yang symbol’s sine wave as The Radius of Curvature of All Natural Law. The statement from a well known book, “Let there be Light” is now enhanced with far more practical meaning: Light’s velocity, converted into an energy differential is the measure of the radius of curvature of all natural law; This same energy differential (VC) is the total energy contained in each and every gram of atomic mass. It could be said, everything we see and touch is light in motion or light stationary. http://evolution-intelligentdesign-survival.blogspot.com/2010/01/its-musical-universe.html . Evolution, unimpeded, does not create the conditions of today.

Yet now, 66 years later, after first application, antigravity, transportation point to point (without going through all points in between), field propulsion, energy (H2) from water at less than 2 cents per gallon…all still seem strange or unknown in our contemporary disabled science …….. however no more strange than the gifts we are giving to future generations http://freedomtimes.blogspot.com/2010/07/our-gifts-to-future-generations.html . Surely we do not believe science is so so backward, it cannot get out of oil and lethal nuclear radioactive processes for energy use and application, a stagnation causing the increasing worldwide poverty gap.

Repeating From Evolution, Intelligent Design, Survival “Statistically, this period of evolution is now almost entirely under the control of conscious human intent and will, and far less influenced by unconscious instinct, genetic mutation and natural selection. Conscious intelligence through human intent usurped unconscious instinct, genetic mutation and natural selection as the evolutionary driver somewhere back in caveman days. Science and Technology, Humanity's extended senses, are at the Steering Wheel today. Blind Science and Technology with Government/Corporate secrecy, power, greed and lies, and Humanity’s future becomes obvious to all. In a Universe of Infinite Energy, the belief that “there is not enough to go around” defies every known concept of knowledge, intelligence, wisdom and understanding.

Posted by Freedom Times at 8:02 PM No comments: