As the rise and fall of great, legendary civilizations fortell, there are potentially devastating, lethal dangers to their sustainability brought on by the suppression of knowledge, history and the science of Energy.

Today, many scientists, pursuing various paths of scientific inquiry are mutually engaged in the attempt to re-discover and to exploit the advanced art and science of crystalology that was lost to the earthman during the last great collapse of science and civilization many thousands of years ago.

Large KDP crystal grown in two months for NIF. (legend: ...the maximum amount of energy that can be generated or transmitted by a crystal is limited only by its size and by the material of which it is composed. Because of the precise lattice like structure of the crystal its energy output can be controlled and directed in a very precise manner..) 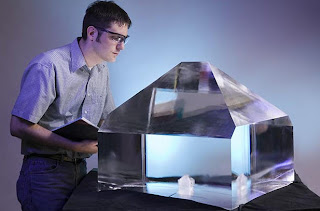 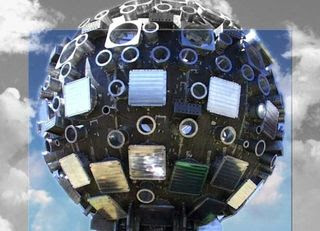 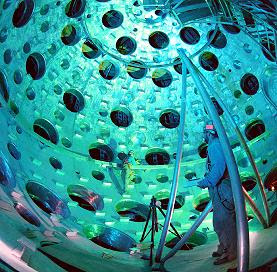 The interior of the National Ignition Facility target chamber, which weighs one million pounds and measures 30 feet in diameter

The National Ignition Facility, a man-made machine designed to recreate the power source of stars. If all goes as planned, the facility’s 192 lasers — made of nearly 60 miles of mirrors and fiber optics, crystals and light amplifiers — will fire as one to smash a fleck of hydrogen fuel smaller than a match head. Compressed and heated to temperatures hotter than those of the Sun, the hydrogen atoms will fuse into helium, releasing bursts of thermonuclear energy.

missing in action, simple simon (4th grade level) science fundamentals of space time mass matter energy gravity
TIME: Many of the difficulties which we encounter in our attempt to understand the operation of the natural laws arise because of our severely restricted concept of the nature of time. Time follows the same curve of natural law which is apparent in the operation of all the basic factors of nature, and again the radius of that curvature is measured by the quantity C. Follow the example in StarSteps which puts us in a unique position from which we can, from a single point in time, observe ourselves occupying three rather widely separated positions in space.
SPACE: The degree of separation which exists between any two bodies is determined by the degree of curvature of the natural laws which exist between them. In making observations, of course, we must remember that, since the natural laws are relative, the mass of the body itself influences the degree of curvature
• StarSteps
• In short, the quantity C is the measure of the radius of curvature of natural law. It is the factor which will enable us to determine precisely the degree of change in the curvature of one law which will be brought about by a specified change in the application of the others. It is the factor which will eventually tell us how to place our transport vehicles in either the positive or negative portion of the gravitational curve with respect to the earth or any other planet which we may choose to visit.
• When we state that the quantity C is the radius of the curvature of natural law, we mean simply that if a differential of energy equal to this quantity exists between the observer and the point which he is observing, the natural laws will be suspended. If the energy differential is in excess of the quantity C, the laws will appear to operate in reverse at that point.
Crystal Fundamentals and History

"It would seem therefore that the transportation device driven by the huge Atlantean Fire Crystals performs its function equally well whether the object on which it acts is in the air, upon the surface or beneath the sea"

My mentor’s 1970 Lecture that follows, incorporates two subjects, which at first glance, may seem to be far apart both in time and basic nature. However, both subjects have roots in antiquity. And as we shall see, the one becomes the only adequate and logical explanation of the other.
......................................
The science of metaphysics has always had a deep interest in, and respect for, the crystal, because of the many references in ancient language to its unique nature and remarkable properties. It has only been in the past few years, however, that the crystal has begun to find its rightful place in the progress of the more conventional sciences.

The chemist of course, has always had a certain special interest in the crystal because it represents the only completely natural assembly of atoms or molecules, each one of which has settled exactly into its proper spot in the solid crystal from the saturated liquid in which the crystal grows. Thus the finished structure becomes one of great regularity and considerable beauty as most of our precious jewels and gem stones demonstrate.

It was not, however, until the scientist began to apply various forms of energy and forces to the crystal that its true importance began to be realized, although it is as yet far from being completely understood.

Our present day science is making many practical applications of these properties, such as in the crystal microphone in which the force of sound waves impinging upon the crystal cause it to generate an electrical potential; and in ultrasonic drills and vibrators where the application of high frequency electrical potential causes the crystal to generate mechanical displacement or force waves which are then transmitted to some other part of the system or to the surrounding medium.

The maximum amount of energy that can be generated or transmitted by a crystal is limited only by its size and by the material of which it is composed. Because of the precise lattice like structure of the crystal its energy output can be controlled and directed in a very precise manner.

For example, medical science is now producing laser beams so sharply focused that they can be used to cut into and remove portions of individual body cells, which are themselves so tiny as to be invisible except under a strong microscope.

Today, many scientists, pursuing various paths of scientific inquiry are mutually engaged in the attempt to re-discover and to exploit the advanced art and science of crystalology that was lost to the earthman during the last great collapse of science and civilization many thousands of years ago.

There is a possibility that these questing scientists could hasten considerably the achievement of their goal if they knew where to look and if it were possible to look there.
..................Continued link:
http://freedomtimesfulltext.blogspot.com/2009/07/national-ignition-facility-crystals.html
Posted by Freedom Times at 7:56 PM No comments: