Another point of view: Introducing the space-time helix and the possible destruction of all matter http://www.spacetimehelix.com/ We should be careful not to jump to conclusions with only “bits” of scientific information, nor act on short sighted scientific information which might only be a tangent, offshoot of Reality. Historically, expanding our window of scientific data to reality changed our view of a flat earth to a round one. We are far, far from done with our expanding point of view of reality. In fact, we are far behind and dangerously so. Top Secret, Need to Know philosophies have never favored the continuity of life. (see below Space-Time Helix article end for 'dust ball' analogy and extrapolate the analogy to adults and PhD's possessing only Bits of information with potentially unfathomable deadly consequences. It pays not to destroy the vast richness of human history, human evolutionary potential, and lessons learned from our educational systems by replacing wholesome education with robot, disconnected, specialized, corporate slave sponsored and censored education. The deadly consequences of "dumbed down" go far beyond the trouble with physics and the idling Standard Model). 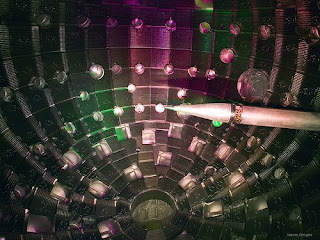 Fables from Atlantis: ………“so the One Substance responds at 831,000,000,000,000; at, again, the next octave of vibration, and again at the next, where it becomes visible as the fatal Unfed Light, last form of matter below where matter ceases and mind begins, called in Atla the “Maxin,” and again, by the Tchin as the “Vis Mortuus.”


“The Atlanteans used laser rays & crystals to fuel their power plants. There was a huge "Firestone", with power generated by filtering the rays of the sun through ruby prisms, which concentrated energy upon instruments connected in the transportation complex by remote control. Inside a huge dome with a sliding roof, cosmic energy stations transmitted beams that could be turned up so high, they became the famous Death Ray. (according to Ruth Montgomery, and Edgar Cayce in their metaphysical receiving sessions) “ Scientists also perfected Anti-matter. When a beam of anti-matter comes in contact with ordinary matter, it instantaneously converted it into invisible energy. In other words, it vaporized it! 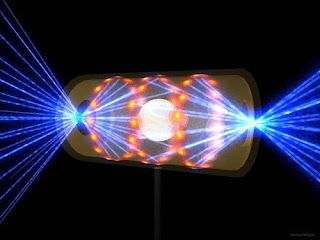 Reality from Cern and ....NIF, National Ignition Facility https://lasers.llnl.gov/: …………” Antimatter is the mirror image of conventional matter with opposite properties. Antimatter is destroyed whenever it collides with matter, turning both into bursts of electromagnetic radiation. Scientists believe this process was crucial to the fiery creation of the universe billions of years ago. Why so little antimatter is made now in nature remains one of physics' great dilemmas. Only modest levels have been detected in cosmic ray showers and the nuclei of distant galaxies. Antimatter is difficult to make in the lab, too. Giant particle accelerators at CERN and Fermilab near Chicago specialize in the quest. In the first antimatter experiments a few years ago, only dozens of short-lived antimatter particles were created. 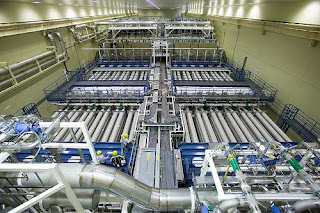 Hydrogen, the most abundant element, consists of an electron orbiting a proton. Antihydrogen is the exact opposite; a positron -- an electron with a positive charge -- orbiting an antiproton, or a proton with a negative charge. In the latest experiments, ATHENA researchers used the CERN accelerator to create antiprotons and electromagnetically trapped them in a vacuum chamber. A radioactive source, meanwhile, was used to create positrons, which were held in a separate trap. The antiprotons were then fed into the pool of positrons, where the two combined to form antihydrogen. The antimatter was short-lived; Hangst said it was annihilated when it bumped into normal matter. Detectors picked up the unique signatures of antimatter as it was destroyed, he said. Using antimatter to power a starship or create a weapon, meanwhile, is still in the realm of science fiction, he said. Making antiprotons requires 10 billion times more energy than it produces. For example, the antimatter produced each year at CERN could power a 100 watt light bulb for 15 minutes, Hangst said.

The National Ignition Facility: Ushering in a New Age for Science The world's largest and highest-energy laser was formally dedicated on May 29, 2009. In 2010, NIF will begin experiments that will focus the intense energy of 192 giant laser beams on a BB-sized target filled with hydrogen fuel. NIF's goal is to fuse the hydrogen atoms' nuclei and produce net energy gain – the same fusion energy process that makes stars shine and provides the life-giving energy of the sun. Scientists have been working to achieve self-sustaining nuclear fusion and energy gain in the laboratory for more than half a century. When the National Ignition Facility (NIF) begins ignition experiments at Lawrence Livermore National Laboratory (LLNL) in 2010, that long-sought goal will be much closer to realization.
NIF's 192 giant lasers, housed in a ten-story building the size of three football fields, will deliver at least 60 times more energy than any previous laser system. When all of its beams are fully operational, NIF will focus nearly two million joules of ultraviolet laser energy on a tiny target in the center of its target chamber – creating conditions similar to those that exist only in the cores of stars and giant planets and inside a nuclear weapon. The resulting fusion reaction will release many times more energy than the laser energy required to initiate the reaction.


Another Point of View http://www.spacetimehelix.com/

INTRODUCING THE SPACE-TIME HELIX AND THE POSSIBLE DESTRUCTION OF ALL MATTER
By Roland Weiss Clopton….. For over a century, since Albert Einstein published his first paper on relativity in 1905, physicists have struggled to resolve fundamental differences between quantum theory and the continuum or field theory. The field approach must have no singularities; but the quantum approach has only singularities….. Regardless, whatever final model ultimately emerges will look very much like the Clopton Model, incorporating infinite extension, the speed of light, rotation, proto-mass and proto-charge, which sounds very much like dark energy and dark matter theorized today. Current theories were all built on the paradigm of flat non-reactive space and billiard ball matter. It has been my intent to demonstrate that space is underlaid by a highly reactive matrix comprised of the space-time helix……. If the Clopton Model is true, NIF machinery has the potential to destroy both space and time, and wipe out all record of human existence in a new type of fire
TABLE OF CONTENTS
1. Questions Left Unanswered by Physical Science 2. Introducing the Space-time Helix (STH) 3. The Meaning of E = mc2
4. Relativistic Time Dilation, Relativistic Mass Increase, and Lorentz-Einstein Contraction 5. Space-time and Dark Matter 6. Speed of Light
7. Where Does Mass Come From? 8. Where Does Charge Come From? 9. What Is a Proton and Electron? 10. What Is a Neutron and a Neutrino?
11. What Is a Photon? 12. What Is Electromagnetic Radiation? 13. What Is Electricity? 14. What is a Force? 15. Electrostatic Charge 16. Magnetism
17. Gravity 18. Inertia 19. Right Hand Rule 20. Unlimited Power by STH Coupling 21. Chemical Bonding 22. Power Source for the Universe
23. Conservation Laws 24. What Is Antimatter? 25. What Are Short-lived Particles? 26. Particle Spin 27. High Energy Particles and Cosmic Radiation
28. Avogadro’s Number 29. Brownian Motion 30. Continuum – Quantum Commonality 31. Big Bang and the Shape of the Universe
32. Background Radiation 33. Is the Expansion Rate of the Universe Accelerating? 34. Dark Energy 35. An Imminent Danger 36. Closing Comments

Dust balls.
Dr. Lloyd E. Cannon once reflected on this story: The child who was informed by his Sunday School teacher, "from dust ye came, and to dust ye shall return," (no doubt referring to Wise King Solomon’s words: "All go unto one place; all are of the dust, and all turn to dust again.")
At home the little boy happened to roll a ball under the bed, and came running to his mother, exclaiming excitedly, "Mommy, Mommy, come quick! There is somebody in the bedroom under the bed!:" Showing his mother the rolls of dust underneath the bed, the little boy said, "see, he is either coming or going."
That pile of dust signified to the little lad just one thing, from that "bit of knowledge" he had recently acquired, to him God was in the process of creating another man, or of taking one away.

..........repeating from blog "Traveling at Warp Speed" - how could any intelligent species sit for 100 years upon such delusional concepts of: "as an object travels faster and faster, its mass increases," or "As an object approaches the speed of light its mass becomes infinite." The obvious subsequent realization of such a short sighted error swiftly corrects to - the 'increasing mass' of the target is only the measure of the kinetic energy differential which exists between them (specified reference points between which measurements are made - else measurement is meaningless). The mass approaches infinity only as the energy level approaches that of the accelerating force. In the case of the quantity C, usually called the velocity of light (VC), the differential is equal to 3 x 10(10) centimeters per second, or if we convert this velocity to its equivalent energy we would have 9 x 10(20) ergs per gram of mass - further notating a most significant relationship property of light/energy and mass/matter: the VC energy differential is also exactly equal to the total energy inherent in any gram of matter, resulting in the natural outcome, that the quantity C is the radius of the curvature of natural law, simply meaning, that if a differential of energy equal to this quantity exists between the observer and the point which he is observing, the natural laws will be suspended. If the energy differential is in excess of the quantity C, the laws will appear to operate in reverse at that point. Since the velocity of light energy differential can also manifest as a frequency, polarizing gravity becomes possible at the local, here and now, level. (StarSteps)