A Happy Fourth with a reminder: Freedom is not Free

The end of the Oil Age and the beginning of a New Energy Age are upon us, and we need to take decisive action to ensure that the transition moves forward. We need to come out of the box of elementary, unsustainable “green technologies” and move forward with truly sustainable technologies.

As Dr Brian O’Leary says below, mismanagement by those corporate and political leaders who are either ignorant or criminal, especially in the energy field is not conducive to supporting Life.
Imagine, people in this free country still today, believing that the science of truly sustainable energy technologies are beyond our lifetime, when in fact early test stages were begun in the 1940's (and subsequently silenced). The Radius of Curvature of All Natural Law (http://fuel2000.net/ ) is comprehensible in grade schools and smoothly ties in Relativity, statistical Quantum physics and stems from Einstein's "discarded" 1928 Unified Field Theory upon which the tests were based. The consequences of this silence and obstruction to the natural evolutionary processes of Life is in full blown evidence, just beginning to show potential.
I ask again, in a world of highly specialized science and technology, a world exploding in population with more and more and more needs, desires, wants, begging for work, why is the economy crashing? Why are we not building schools, training centers, factories - and paying more than starvation wages - so people can buy all the wonders science and technology can produce and provide? What obscene madness has created this bloated disparity between the 2% rich and 98% poor? What MBA/PHD economic madness cannot see this cancerous growth spreading to the remaining employed, and the accelerating effects it will have upon city, state, and national governments? ......................The belief, "not enough to go around" stems only from inadequate comprehension of Energy and Greed.

Announcing a symposium on breakthrough sustainable innovation Aug. 14-18 at Montesueños

BrianO'Leary
http://www.brianoleary.info/ http://www.montesuenos.org/ drbrianoleary.wordpress.com montesuenos.wordpress.com
Imagine looking at the Earth from the Moon, or through a telescope from Mars or Venus. What would you see? The astronauts tell us we can take in a feast for the eyes and soul far greater than the separated green and blue planet of standard maps, or Carl Sagan’s Pale Blue Dot as seen from deep space. Instead, we see a vibrant, ever-changing blend of turquoise and white on a living, swirling, rotating disk. The Earth from this vantage point still looks alive, symbolizing hope. It’s when we zoom in closer to survey from the land, water and air that the pollution becomes evident. The abuse of our planet cries out for a massive restoration to health and living vitality on every scale, from the largest continent, ocean and air space down to the tiniest microbe and electron. 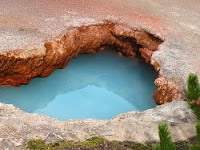